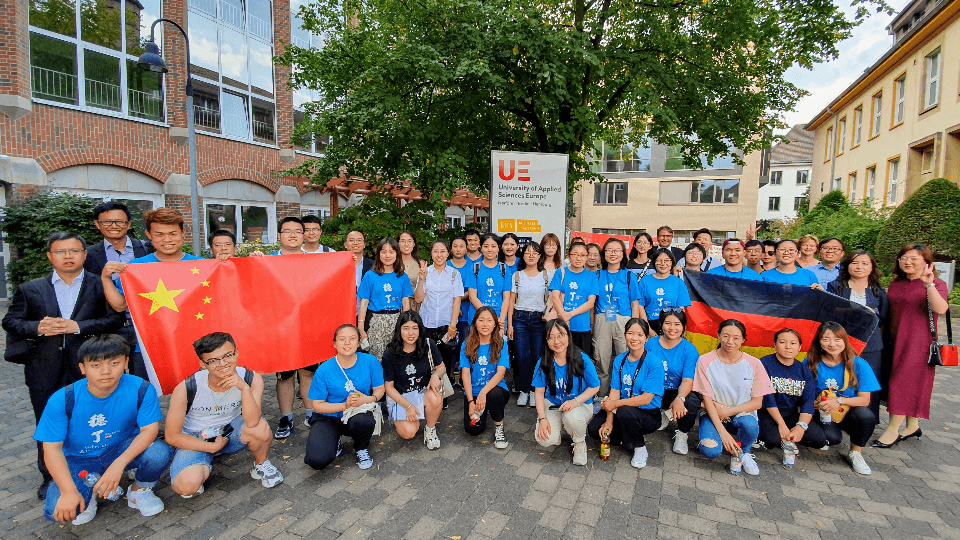 Berlin/Iserlohn (10th October 2014) – The foundation of the first German-Chinese Joint Venture Education Cooperation Project for Entrepreneurs was signed today at the 7th Sino-German bi-annual bilateral conference in Berlin under the auspices of vice chancellor and economic minister Sigmar Gabriel and minister Shaoshi Xu, chairman of the national development and reform commission of China. Both Chancellor Merkel and Premier Li Keqiang welcomed this and other strategic cooperation between the two countries when attending the forum, underlining its importance for the German-Chinese bi-annual consultations. The international approach of the project will foster a better cooperation between the two countries and strengthen the intercultural and academic relations across the world.

The cooperation project will apply to be the first university for entrepreneurship in China. The school is targeted to have 18,000 students and will be located in the Sino-German Ecopark in Qingdao. Partner of the joint venture will be the Qingdao Technological University, the Business and Information Technology School (BiTS), a state-approved fully accredited private University of Applied Sciences in Iserlohn (North Rhine-Westphalia) with other campuses in Berlin and Hamburg, as well as the local government of Qingdao. BiTS is part of the network of Laureate International Universities, the leading international provider of private higher education.

The newly founded institution will close a gap in the academic education for entrepreneurs in China and be of particular value for the next generation of leaders in the growing family business sector“, said Carlos Bertran, CEO of Laureate Germany. Zhao Shiyu, President of the Administrative Committee of the Sino-German Ecopark in Qingdao, expressed the expectation that the new university was to become one of the best in the country and in the whole of Asia.

The government of Qingdao will contribute the land and the initial buildings, in order to ensure the launch of the university. BiTS will lead the academic built-up of the university, which will follow the standards of the German academic educational system. This includes the development and expansion of the academic infrastructure such as study programs, acquisition of academic personnel as well as the governance of the university. BiTS professors will also have the opportunity to hold seminars and lectures. Furthermore, there are plans for an exchange program across all faculties and joint research programs.

Besides bachelor degree and business programs, the university will offer special training courses in entrepreneurship and specific industry know-how. Master programs, MBA offers and leadership programs target existing entrepreneurs, their relatives (second generation) and professional managers in the private as well as the public sector.

Once established, the school will contribute to China’s aim to educate about half a million students annually for entrepreneurship between 2014 and 2018. According to a current MyCos report, 13 percent of all Chinese university graduates in 2013 stated that they want to pursue an entrepreneur’s career. Another 78 percent voiced their interest to become an entrepreneur in the future.

The Sino-German Ecopark is a bi-lateral initiative, fostered by the German Federal Ministry of the Economics and the Chinese Ministry, of Commerce in the area of sustainable city planning in China. The Ecopark seeks to meet high ecologic requirements through the expertise and solutions of German technologies. Being located between Beijing and Shanghai, Qingdao is easily accessible. Qingdao is a city with a population of 9 million, a per capita GDP on par with Shanghai, and has a historical connection to Germany.

About BiTS / About Laureate International Univerisities

BiTS Private Business School in Iserlohn, Berlin and Hamburg, Germany, has been instilling the entrepreneurial spirit in future managers since 2000. Focusing on case studies, practical seminars and integrated internships, BiTS provides its skills to more than 1,500 students needed for management and leadership positions. A mandatory semester abroad is part of most BiTS  programs. BiTS offers undergraduate and graduate programs, with an emphasis on business and management studies, communication, media and journalism, sports and event management, business psychology and green business management. BiTS is state approved, and the Wissenschaftsrat (German Council of Science and Humanities) has granted institutional accreditation. The Foundation for International Business Administration Accreditation (FIBAA) has granted program accreditations. BiTS ranks among the top business and media universities in Germany. BiTS hosts the award-winning BiTS Campus Symposium.