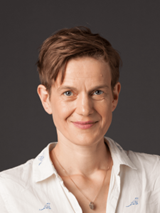 Anne-Christin Plate is an artistic-scientific assistant and has been with the UE and BKT for a total of eight years. Plate's expertise is in Illustration, Animation, and Short Films. She also holds the responsibility of being Officer for Equal Opportunity at UE Berlin. Plate is an artist that uses art to empower her students, community, and herself. She allows and encourages one to dig deep and use art as a tool to transcend human elements to the audience.

1998-2007
Diploma studies in painting/textile at the Burg Giebichenstein University of Art and Design, Halle