The BBC Visits the University of Applied Sciences Europe in Berlin 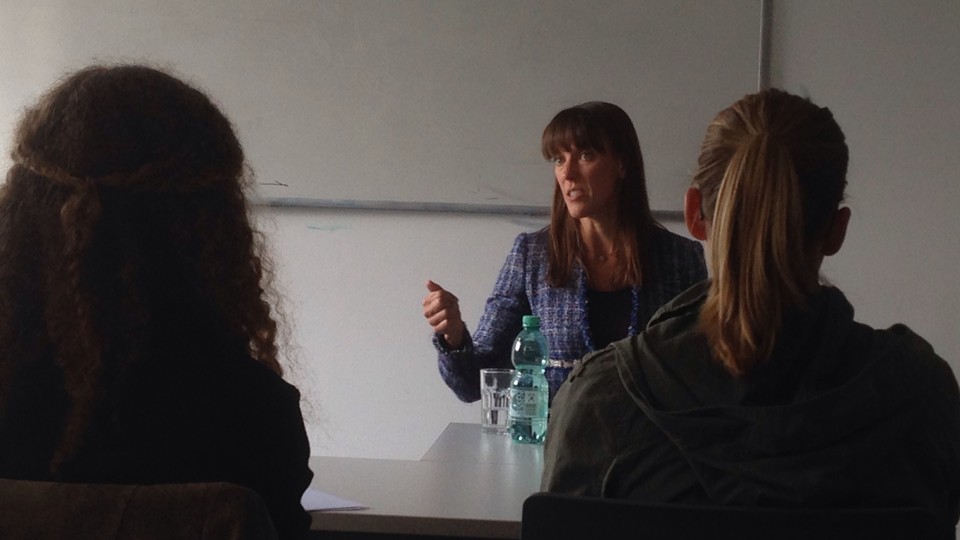 The career of a Foreign Correspondent is exciting and full of variety. You travel from one country to the next and report on events in foreign countries. It’s a dream job for many Journalism and Business Communication students. At the recent lecture on “Being a Foreign Correspondent,” they had the great opportunity to speak with Jenny Hill from the BBC and to learn all about this career path and lifestyle.

Who is right for this career, and do you have to study Journalism to pursue it?

Jenny herself started small and studied English. It was never her career goal to become a Foreign Correspondent for the BBC in Germany.
She got her first experience as a journalist at a small BBC radio station in Jersey (UK). She went on further to study Journalism for one year.
From that small radio station, Jenny climbed the career ladder higher and higher to become a morning television presenter. When the advertisement for the Correspondent job in Germany was published, she thought, “Why not?”

“No one is born as a Foreign Correspondent. God, no, I myself had a lot of doubts when I seized the opportunity and got the job. I thought I would never pull it off.”

Jenny deliberately jumped in with both feet and learned to love the job and Germany. She got used to the people, the languages, and the atmosphere in Berlin, and today she would be reluctant to move another country.

“Germany reminds me much more of home than I ever thought possible.”

There are exciting and boring days, just like in any job. Say there’s nothing going on for several days in your reporting areas or just the usual things. As a Correspondent, you have to take a bland story and write something interesting for your home country. One advantage is that you have a lot of freedom in this position. To a great extent, you can decide what you want to broadcast.

“Stories that involve other English people are especially popular. BREXIT was particularly well received. Surprisingly, there’s a big demand for topics around the Second World War and Nazis. For example, yet another old bomb from the war was diffused in Berlin—for Berlin residents, this is relatively normal, but in England this was practically a sensation.
I try to gradually change the view of Germany. We British always say that Germans have no sense of humor. So I also report on funny and amusing events.”

The work isn’t always comfortable. You have to keep a cool head as a foreign Correspondent, especially in crisis situations. Quite a lot is expected of you and you have to demonstrate perseverance. You have to record a radio piece and simultaneously type up an article for the newspaper in your Smartphone, all while the live TV broadcast is about to begin in a few minutes.

“It was particularly extreme after the 2016 attack on the Christmas market in Berlin. You couldn’t see anything—I got pictures from the helicopters. They tried to explain to me over the phone what had happened or what they could see, all while I was standing in front of the camera. It’s not always easy, and it’s not at all rare to suffer from sleep deprivation during critical events,” Jenny explained.

Working for the BBC as a Foreign Correspondent inspires Jenny every day all over again. She loves her job with heart and soul, even though it has involved certain sacrifices.
Jenny deliberately decided against children and put her career first. Family and children—a very tough topic in the life of a Foreign Correspondent.

“You’re always traveling, and you don’t stay long in each country. From time to time, you also find yourself in dangerous situations, so you need to think about all aspects of your future and how your decision will influence them,” Jenny told us.

One student asked the BBC Correspondent if this career would be possible for a woman who wants to have children.
“Naturally! A very good friend of mine just recently had her second child and she does a terrific job.”

One could read the question “How?” in the Journalism students’ eyes. Jenny talked about the lifestyle of her friend and her friend’s husband, who works from home and is able to care for the children. Other partners—with or without children—stay in the home country and carry on long-distance relationships.

“It depends on how you come to an understanding with your partner. Whether you mutually support each other, travel together, or whether you hire someone else to care for the children. Everything is doable. You decide what to make of the situation.
The advantage of the BBC is that it is a very large organization. So you can also request maternity leave, and one of your colleagues can take over your position in your absence.
The BBC has worked for a long time on equality for men and women, so that women can perform the job just as professionally as men, without having to limit themselves in the process.”

“Regardless of whether you’re a man or a women—when it comes to family, certain decisions have to be made. The emotional burden of this shouldn’t be underestimated. This is the reason why I decided against children. For me, that ship has sailed.”

Thanks to Jenny Hill from the BBC, our students were able to learn a lot about the life of a Foreign Correspondent.
​In addition, our prospective journalists made an important international connection for their professional futures.