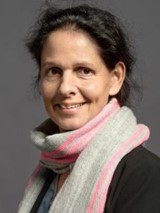 Professor Jain is the coordinator and head of teaching Art and Media Theory for UE in Hamburg. Her areas of competencies are in art, media, cultural and design theory, in addition to philosophy, aesthetics, ethics, gender studies, artistic-design research and curatorial practice. Prof. Jain has years of experience in Curation, exhibition management, mediation and public relations, project development, and acquisition of third-party funding with many years of experience as a lecturer and researcher in the subject areas.